We were awoken this morning to confusion. Jerome said his phone was missing... WHAT?
Everybody was now awake.
We've been robbed!

I sighed with relieve - I wasn't missing anything. Amber however was. A lot of money.
Another friend of ours, Mike, was also missing his phone (which had been right next to his pillow). When the police arrived (or should I say once - they took their sweet time!) they didn't appear to take the situation very seriously.

It had been someone from outside. Not a pilgrim.

Honestly we couldn't wait to get out of there! We started our day and started the 28km walk to  Logroño. 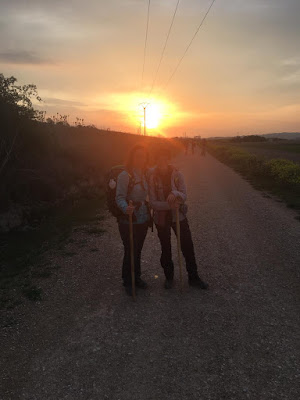 We saw the city hours before we got there. One of the Camino's worst tricks.
Today was the first day we mentioned to Malcolm (who would not leave our side again till we returned home) that we wanted to get tattooed in Santiago. He said he was in - he would later confess he thought we would forget about it (we didn't).

And neither did Joey (a pilgrim we met today). He also planned on getting a tattoo. His cheeky smile and energetic nature attracted me to him immediately. Like Malcolm and Tony, he would turn out to be a huge blessing for me. So much so in fact, that I would have probably not made it to Santiago without him!

The albergue we stayed in was almost empty. There was no WiFi in the rooms (which bothered us a lot) but the food was amazing! I was shattered after today, falling asleep as soon as my head hit the pillow to the sound of rain, once again.